A Message In Colour

A Message In Colour 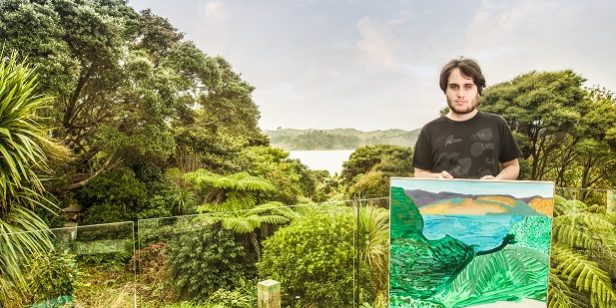 23 July 2018 – When Talia Waldegrave caught up with the Janson family in Raglan for UNO magazine, she found a supportive family.

THE HEARTY aromas of an autumnal lunch hit us as soon as we arrive at the Janson homestead. 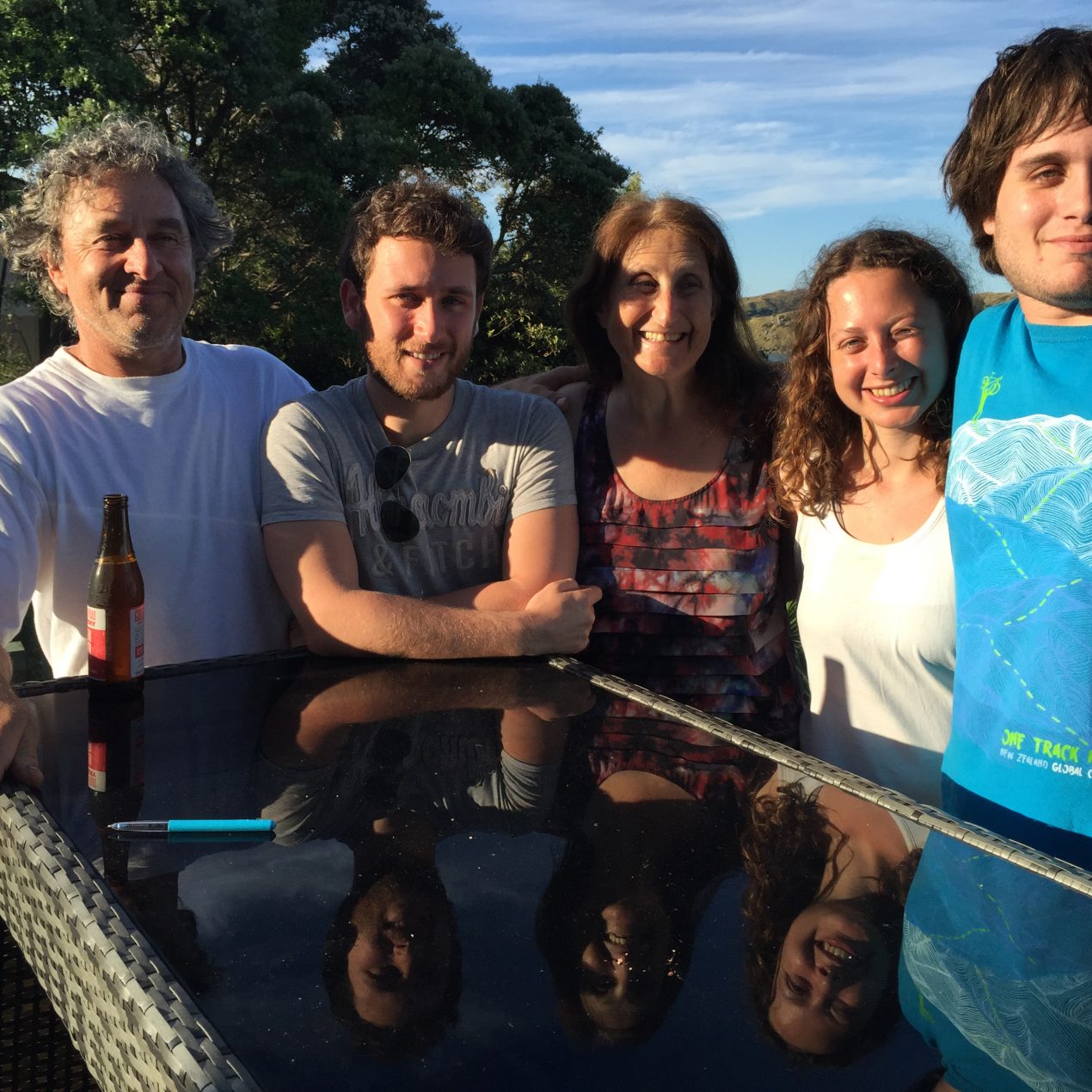 After a slow journey to the laid back west coast town of Raglan, nothing could be more welcoming.

But then to our surprise come the hugs, smiles and incredible hospitality from Yaniv’s parents, Annick and Robin.

We’ve come to talk to Yaniv about his art; however, he is nowhere to be seen. Many of us would shy away at the thought of writers and photographers knocking on our door but for Yaniv, living with Asperger’s, shyness is all too familiar.

While we wait for him to get used to the idea of us being here, Annick gives us a tour of the home, accompanied with narratives on Yaniv’s unique journey into the art world.

“Yaniv likes to be near his art, so we had a bed tailor-made just for him that allows him to store his paintings underneath.

“His bedroom overlooks the Raglan harbour and he actually painted a picture of this view, perhaps from photos he had seen, years before he had even been here. 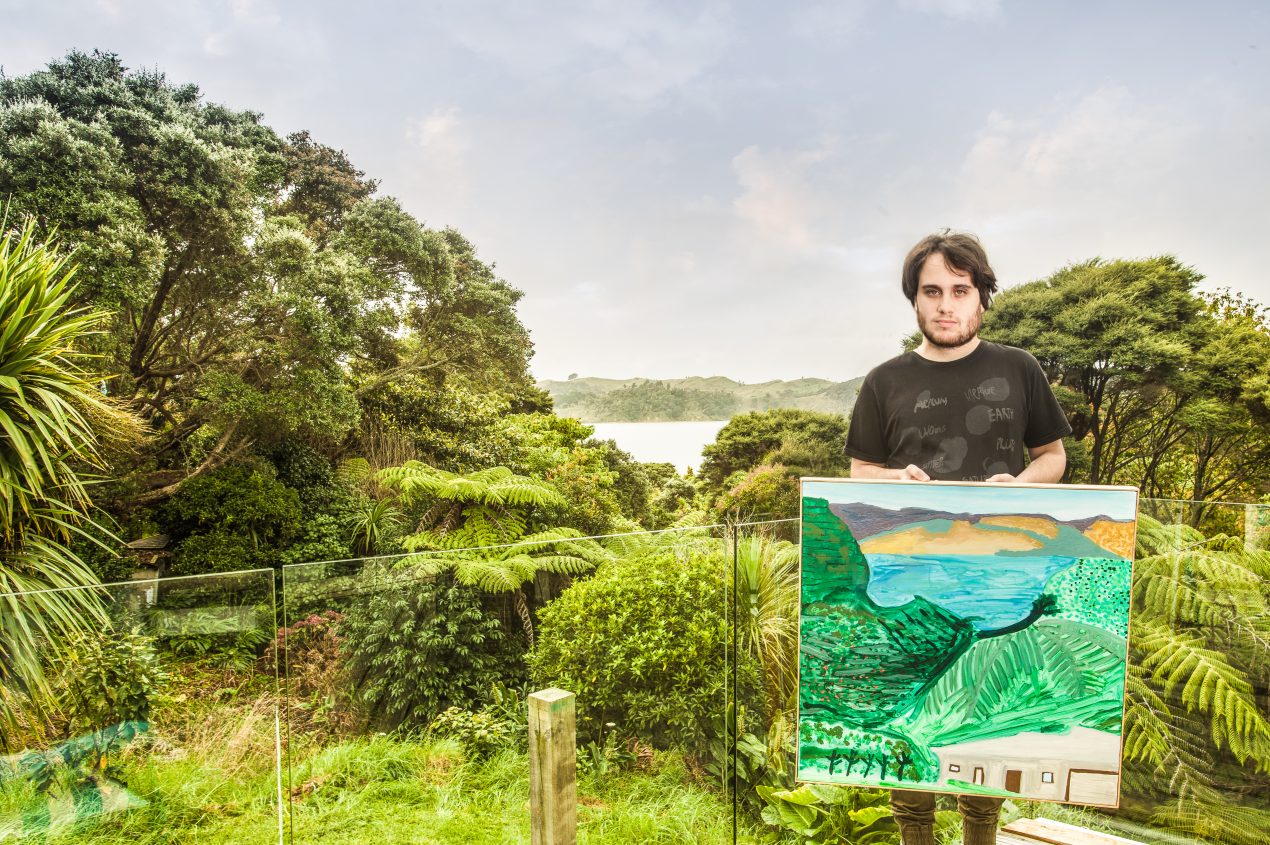 RAGLAN HARBOUR: Yaniv Janson’s bedroom overlooks the harbour. This is how he sees it on canvas. Photo Tracie Heasman for UNO magazine

“So far, Yaniv has won eight awards. The first time he painted on a large canvas, he was a finalist in the National Contemporary Art Award and the Wallace Trust Award. For both he was the youngest. We used to hide his age at the time because we thought people wouldn’t take him seriously.

“When Yaniv was at kindy, he used to dabble in art and it was quite unique even at that age, but later on when we tried to give him brushes and paint, he just wasn’t interested. At 16, his art teacher held an exhibition among the students. Huddled around Yaniv’s painting was a mob. That’s when we knew he had a special gift and we had to nurture it.

“As soon as he painted one piece, people would walk by and say ‘Can I buy it?’ For months we didn’t have any paintings because they literally sold wet!

“One day we were contacted by an organisation called Eg Art that works with the European Commission. Eg Art helps artists with disabilities and they hold exhibitions throughout Europe. The first one was called Chemins Croisés at the Galerie Celal in Paris, between Centre Pompidou and the Louvre. Yaniv was the first New Zealand artist to be invited. He sold three paintings at that show.

“We love to travel and took all of our children to Paris when Yaniv was about two. Of course we went to the Louvre and our older children wanted to get out of there right away. We managed to see the Mona Lisa. When we were back in Paris for his exhibition, he spent nine hours wandering the entire gallery. This time it was me who got tired!”

Changing the world one painting at a time
“Yaniv’s first exhibition was in the Waikato Museum in 2008. It was here that he realised he could share a message with people through his paintings, which fuelled his interest in social and environmental issues. This started a long-term dream to exhibit at the United Nations, so it’s been a passion for a long time. 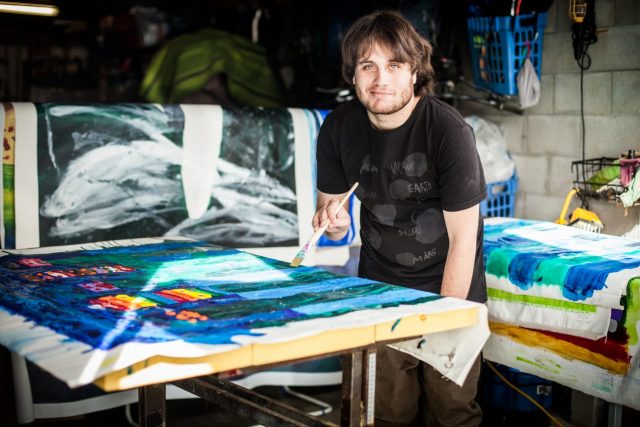 “One Saturday morning he got a call from someone at UNESCO and we thought,  ‘This must be a joke.’ It wasn’t. They had stumbled across Yaniv online and asked if they could put the link to his book Changing the World One Painting at a Time on their website. UNESCO reaches hundreds of thousands of teachers worldwide, so we were very honoured.”

Rather than print the book and destroy forestry, Yaniv suggested the book be available as a PDF to teachers all over the world.

“He is always considering different yet ethical ways of doing things.”

A feast for the senses
Vibrant in appearance is Messy Earth, an artwork made entirely by test pots; 22 of them poured straight onto canvas. Yaniv explains: “There was no paintbrush, just test pots. It took many days to dry. I chose to use 22 because it’s my favourite number as well as the favourite year of my life.”

Sir James Wallace certainly liked it and is now the proud owner. As one of his biggest fans, this is the fifth painting of Yaniv’s that he owns.

Ron Epskamp, Gallery Director of the Exhibitions Gallery of Fine Art says he admires artists like Yaniv, “His perspective requires us to view our world in a unique way.”

Flowers is due to showcase and again, not a single paintbrush was used. Instead, flowers were dipped in paint and water was poured on top to create texture.

Similarly tactile is Freedom, where paint was squeezed through tubes from above.

“There are many colours on it and if you touch it, it’s rough. I’m happy for people to do that. Every gallery has a sign saying, please don’t take photos, but I make a sign to say please DO take photos, please DO touch.

“Normally I try to imagine the paintings in my head but if I can’t imagine them well, I look on the internet to get some inspiration. Sometimes I am inspired by Raglan and the harbour. I walk around the mountain and take pictures on my camera.”

Obstacle or opportunity?
Realising there was traction here in New Zealand to spread his ethical message, Yaniv created the ‘Taking Action Project’ which connects with organisations to raise awareness that artists with a disability have a contribution to make.

Yaniv’s own offerings to the art world were quickly recognised and he became a finalist for the Attitude Award, celebrating achievement in the disability sector – a huge nod to his achievements with Asperger’s.

“Yaniv donated a painting, which was auctioned at the ceremony and fetched $3,000. The entirety of this went to KidsCan.”

The purchaser has now become one of his greatest supporters and close friends, Wellington CQ Hotel General Manager, Olivier Lacoua.

Portfolio, Since the Beginning and Changing the World One Painting at a Time are all published books housing Yaniv’s colourful works.

“Olivier buys my books to give to his VIP guests. Just yesterday he ordered another 20.”

The message
Using a mix of acrylic and water on canvas, including numerous test pots, Yaniv’s paintings convey an ethical and poignant message, he told me. 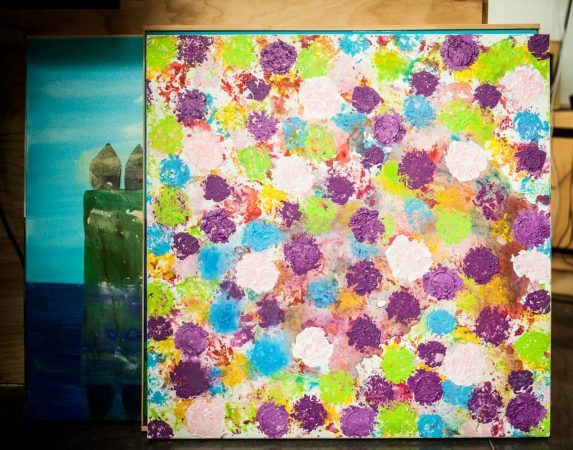 “Rich, Middle Class, Poor draws attention to the everyday living conditions of the rich, the middle class and poor people. The rich people live in a multi-coloured village on the mountain and the brown village by the ocean. They have more money and food. They choose what colour house they want. They see at least the ocean and other things from their home. The middle class people live in the silver village by the bottom of the mountain. They have to share their home with other people who are middle class. Their houses are all the same. They only have a medium amount of clean water and food for living. The poor people live in the bushes. They have no clean water, no home, no nice view, and almost no food.

“I am passionate about the message in my art because I don’t think any other artist has done this before.”

Sole focus
Yaniv has won more than 18 awards, participated in more than 40 exhibitions and sold more than 160 paintings.

From 4 to 14 June, an exhibition of Yaniv’s paintings called Please Do Touch, featured in the United Nations Headquarters in New York coinciding with the annual UN meeting of the Convention of the Rights of Persons with Disabilities.

The exhibition reflected the UN’s 17 Sustainable Development Goals. Yaniv says he was inspired by these goals and turned five of them into themes to help make his paintings: Life Below Water, No Poverty, Clean Water and Sanitation, Climate Action, and Sustainable Cities and Communities.

The idea of Please Do Touch came from his desire to let people experience art through different senses, and to push what is done and not done in the art world.

“I come up with my own ideas and I feel like I’m different from other artists,” he says. “I’m shy and don’t always find it easy to talk with other people but it’s important for me to show that disability is not a barrier to achieving. Disabled people can make a valuable contribution to society. I think I do.”

Artistic appreciation
Yaniv is quick to credit his mentors. Close friend and Distance Delivery Mentor Marcel Baaijens has always been a great support. Despite his recent move to Australia, he is in regular contact with Yaniv.

“Each time I sell a painting, I rush to the computer to email Marcel. Although Marcel is no longer my teacher, it is still something exciting we share together.”

The high school teacher that discovered Yaniv remains in the picture too. A resident of Raglan herself, she visits with the family a few times a week.

Quite possibly his biggest supporter of all though is his mother, Annick. Remembering every exhibition, every piece of art and every milestone, she is as delighted as any mother would be, encouraging Yaniv to be proud of his notable achievements.