No links between vaccinations and autism, researchers prove

No links between vaccinations and autism, researchers prove

There is no link between the Measles Mumps Rubella (MMR) vaccine and autism – Altogether Autism, September 2019.

Vaccines do not cause autism. The Institute of Medicine (IOM), now called the National Academy of Medicine (NAM), concluded that the body of evidence favors rejection of a causal relationship between autism and MMR vaccine and thimerosal-containing vaccine. MMR vaccine also prevents rubella disease, thus preventing congenital rubella syndrome and its associated cases of autism. – Dudley, et al 2018 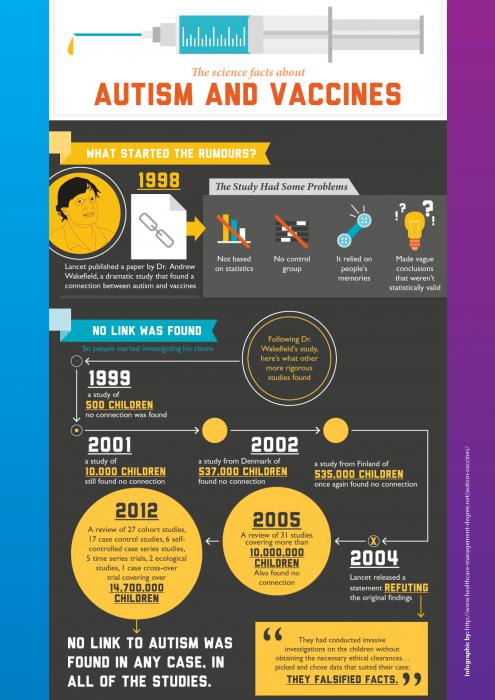 A CAUSAL RELATIONSHIP between autism and vaccinations has been widely discussed since the 1990s, with Measles-Mumps-Rubella (MMR) and mercury (in the form of thimerosal) the primary areas of concern.

Much of the controversy around MMR vaccine and autism followed the work of Andrew Wakefield and colleagues (1998), published in the respected medical journal, The Lancet but later retracted by the Journal in 2004 for both scientific and ethical flaws.

Wakefield was struck off the UK medical register for his fraudulent paper and widely discredited.

Many well-researched, peer-reviewed articles in well-established journals have disputed the idea that MMR causes autism. Following the 1998 publication, a lot of research was conducted in this area, which was unable to replicate the results. For example: 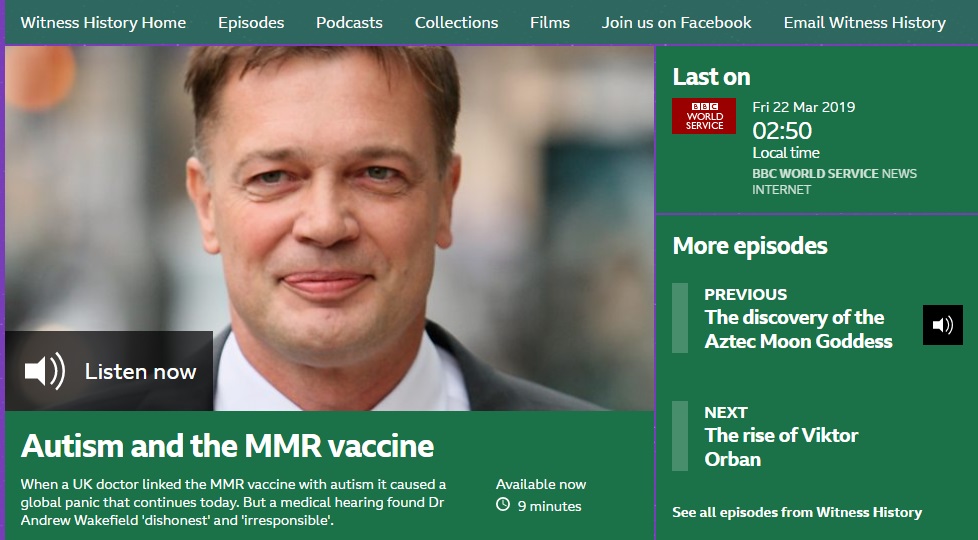 The much-publicised “evidence” by Andrew Wakefield linking autism with vaccines was found to be fraudulent, the author was disgraced and fired.

Maglione et al., (2014) identified that despite numerous studies confirming the lack of association between MMR and autism, parents continue to be concerned about vaccinations. The purpose of their research was to review a wide range of studies to summarise the evidence and to rate the strength of the collective evidence. They found that some vaccines are associated with serious adverse events, for example, they found a high association between MMR and anaphylaxis in children with allergies, and febrile seizures (i.e. convulsions triggered by high temperatures). They did not find evidence of the MMR vaccine being associated with autism, and in fact found high evidence that MMR is NOT associated with the onset of autism in children (Maglione et al., 2014).

There is no scientific evidence to support the claims of a causal relationship between MMR and autism.

A lot of the concern surrounding vaccinations leads back to mercury and thimerosal particularly. Thimerosal is a mercury-based preservative used in some vaccines and other pharmaceutical products. Thimerosal has never been present in the MMR vaccine used in New Zealand and has been phased out of all vaccines used in New Zealand since 2000, including the current influenza vaccines (Ministry of Health, 2016). It is however, still used in some vaccines overseas. The global increase in ASD diagnosis has not been linked to mercury exposure apart from in isolated cases so it cannot possibly be causal to the increased prevalence of autism diagnoses worldwide.

Mercury has been identified as toxic for centuries, with most of the environmental mercury coming from coal-fired stations, waste incinerators and mining (Gorini, Muratori & Morales, 2014). Methyl mercury (MeHg) is the most widespread source of mercury exposure, and occurs most commonly through the diet, through fish consumption (Wisnjevec et al., 2013, as cited in Gorini et al., 2014; Kern, Geier, Skyes, Haley & Geier, 2016). There is some evidence to suggest that maternal consumption of fish may impact children’s language, IQ, memory, attention and visual-spatial and motor skills (Grandjean et al., 1997; Crump et al., 1998; National Research Council 2000b, as cited in Gorini et al., 2014).  There are some studies that suggest methyl-mercury may potentially be involved in autism development but there is by no means consensus and further research is needed (Gorini et al., 2014; Kern et al., 2016).

As stated by David Newman, chair of the Paediatric Society of New Zealand (personal communication, March 7 2017), the key fact is that even if thimerosal was linked to autism (which it is not) New Zealand childhood vaccines have not contained thimerosal since 2000 making it impossible that mercury in vaccines is in any way linked to the reported increase in autism diagnoses in New Zealand.

The one study (Wakefield, et.al., 1998) that suggested vaccines caused autism has been discredited many times by scientific research and the original article has been officially retracted. The research evidence therefore strongly supports a lack of association between autism and vaccinations.