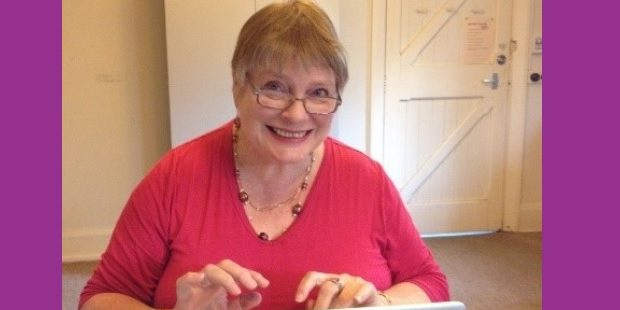 2 July 2020 – One of Leith McMurray’s outstanding autistic features is procrastination. She writes about what that means for her as she ages.

If there is reading material in the house, other things go on hold – sometimes for days, weeks or months! This article has been a victim of procrastination.

I have been doing a lot of reviewing of my earlier life experiences though and have been somewhat surprised by the regular occurrence of meltdowns from the age of 5 (when I started school), right through my life.

Variously admired for my precocity in English and reading and mocked for my hopelessness at maths and sports, it has been a confusing life. Having a father teaching at the same school attracted additional opprobrium, whereas the earlier school we had been stationed at for two years supplied me with kind and warm Maori playmates. Such a culture shock when we moved on!

I found my feet somewhat when I started at university and met people more like me in terms of intellect and education. I came to Christchurch in my third year and met my first husband. After that year, I found a job as a receptionist at the “Child Health Clinic” (for children displaying “behaviour problems”). This introduced me to the concept of social work and dysfunctional families and how to help them.

Following on from this, we married and had two daughters and I found I was very lacking in ability to mother them (which they have never forgiven me for). My sensitivity to noise was a huge problem with all the crying! After separating, my working life started again with finishing my B.A. and then achieving a post-graduate Diploma in Social Work despite the many struggles I experienced. At the same time, I was redecorating a 1911 villa that I had bought. This qualification got me a social work job with the Department of Social Welfare, a difficult post to cope with, not just the bureaucracy, but also some of the clients. Very educational!

Having spent some of my student placement at Sunnyside Hospital (psychiatric) I applied for a social work position there, but alas, it was so different from my first experience as a student! I seemed to be perpetually offending or annoying people and nobody had a clue how to explain or help this. Eventually I became seriously depressed and had to give up this job. Eventually I began working for my second husband, an optometrist, as a receptionist. I began to suffer from pre-menstrual syndrome and had monthly rages when I had to be packed off home. This led to my having a hysterectomy, which calmed things down quite a bit. NB to women: don’t underestimate the effect of hormones on your behaviour!

Again, I was not able to cope with married life and eventually got a job as a taxi driver for Corporate Cabs. I loved driving those beautiful big Fords! This gave me a lot quieter time between jobs and was quite therapeutic. After driving for other owners, I bought a 5-year-old Fairlane on hire purchase and became one of seven Corporate Cab drivers in Christchurch.

When the car had reached its “use-by” date, I was ready to change jobs again and landed a locum social worker job at Princess Margaret Hospital. That was a surprise as when I had been there as a student, the senior social worker became infuriated with me and said that while she was in that position, she would never give me a job.

You can deduce from this that she did move on!

The bone of contention was an experience where my sensory system was overloaded when an older social worker took me and another student home for lunch. Her son was playing very loud music and I could not cope. Again, nobody knew anything about autism. So, she was offended and reported this to the supervisor.

After this I took a distance course in Teaching English as a Foreign Language at an International Language School and began two storm tossed years at several language schools, some of them very dodgy. 9/11 happened during this time and the many Chinese students in the English School at Teachers’ College were jubilant – very surreal. 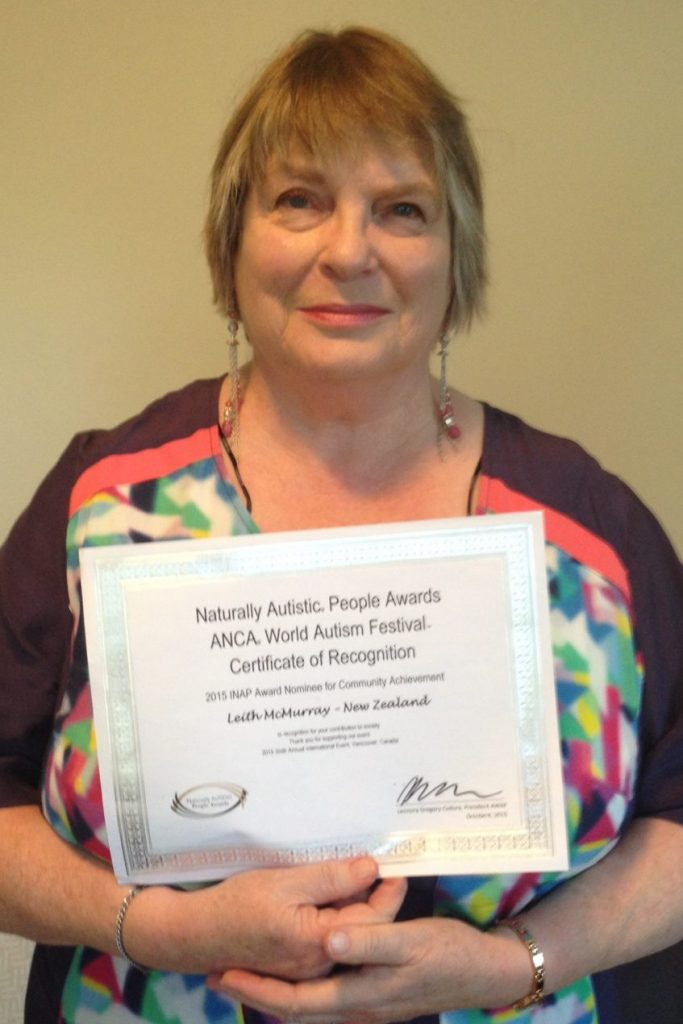 Leith McMurray with her community achievement certificate awarded in 2015.

I was hosting Asian students at this time, and mostly that went along well, but I did manage to upset one lady from Taiwan who suffered huge culture shock and apparently blamed me.

This information reached all the way to Auckland and my name as a host was mud for a while. In the middle of all this, my mother died and then her lawyer absconded with money of hers and others of his clients.

I had begun taking anti-depressant meds long before this and still need to. Thank goodness for modern knowledge! I have thought incessantly about ageing and eventual death since about my mid-40s.This means I should be well prepared! I see my mother in myself increasingly and worry that I, too, may develop dementia.

Old friends have passed away or getting life-threatening illnesses. I have developed a worrying tendency to fall and injure myself. Being always very distractible I can barely concentrate on anything for long, unless it’s a book! A diary is essential so that I know what I am supposed to be doing each day. And yet, there are times when I function very well.

I’ve had various surgeries as my body begins to fail but nothing as major as others I know.

Incontinence has made an appearance, just as it did with my mother. Sometimes I get home dry and as I get out of the car… oops! And there is nothing I can do to stop it! Surely a minute longer could be allowed!

This is where I feel there is someone else inside my head making decisions which over-ride “mine”! I experience a conflict between two parts of my brain, which can be interesting and sometimes very productive.

I’ve spent the last 10 years creating, running and working in a support/social work agency for adults on the spectrum and re-did my two-year Social Work diploma in a year so that I could be a registered social worker. However, the requirements of this are not compatible with the philosophies of Aspiehelp and the registration is aimed at professional, waged people. The good folk at ANZSW and the Social Work Registration Board don’t seem to be at all interested in the issues I have found with them. As I am now retiring, I have not renewed this qualification.

Ageing tends to bring on the need to take little naps. Often only 10 minutes, sometimes longer. Oh, and I have developed diabetes. However, I am still losing weight, so I may become an ex-diabetic!

Stamina and resilience – physical, mental, emotional – often a little less than neuro typical people have- is even more compromised in ageing. You now have time to rest when you like and take the time to do things you find enjoyable!

My distractibility is affecting my life much more than it used to, and I find my life quite difficult as I try to maintain my focus. I am easily confused away from my home and no longer focus so intently on all the things I used to feel responsible for!

Good things. I have stopped feeling responsible for the things I say which offend other people!
Leaving the church, I belonged to for many years has been a great relief as I was always treated as a scapegoat and an embarrassment despite all the effort, I put in to help keep things running. I stayed as long as I did because I was useful in playing the organ for services and the social interaction was pleasant.

I joined U3A (University of the 3rd Age) instead and find this very enjoyable with no people taking offence!

My brain, in some ways, works better than before and I enjoy interacting with other people who are intellectually my equal and not judgmental either!

I’m about to buy a small unit at a retirement village which will need far less maintenance than my present home and garden and offers activities and opportunities for social interaction at my convenience. I also will feel supported there, whereas I don’t in my present home.

And at last, I will feel truly retired!