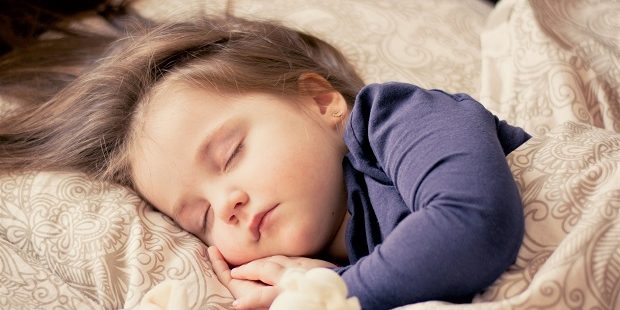 Many autistic people have sleep problems and some have been using weighted blankets to help feel calm – but do they actually make a difference, asks researcher Tegan Andrews?

Research into weighted blankets shows that while they are popular with many children and parents, they don’t increase sleep time or decrease the time it takes to fall asleep. Further, there are some serious safety issues when using weighted blankets. In this article we look at the evidence and risks relating to weighted blankets as a sleep aid for children with autism.

What is a weighted blanket?

A weighted blanket is a blanket which is made heavy by sewing metal or plastic, or grain into quilted layers. It is thought that this gentle, deep pressure helps with sensory integration and reduces arousal and stress, thereby improving sleep. Weighted blankets cost between NZ$300-400 and advocates consider them a relatively cheap, non-drug intervention for improving sleep issues in children with autism.

Surprisingly, given the popularity of weighted blankets, there is very little published research. In 2014, Paul Gringras, Professor of children’s sleep medicine and neurodisability at Evelina London Children’s Hospital, led a team in conducting a randomised controlled trial (RCT)* to see if weighted blankets helped children with autism sleep. Sixty three children with autism and sleep problems aged 5-16 years were given either a weighted blanket or under a non-weighted but otherwise identical blanket for two weeks. The researchers then switched the blankets for a further two weeks so that all children experienced sleeping under both types of blankets. Parents completed sleep diaries and the children wore a wrist-watch that measured the quality and duration of their sleep. The results showed that the use of the weighted blanket did not help the children sleep for longer periods of time, fall asleep faster or wake less often. However, both the children and parents preferred the weighted blanket and thought it helped the children sleep better and make them calmer (Gringras et al., 2014).

In New Zealand, a Masters’ research project completed by Jane Charleson at the University of Canterbury looked at the effectiveness of weighted blankets for sleep issues in five children aged 7-13 years with autism. The sleep problems experienced by these children ranged from early morning waking, delayed sleep onset, total sleep duration, night-time waking and co-sleeping. Four of the five participants were taking melatonin for their sleep disturbances. Of the five participants, one refused to use the blanket and the other four had no significant improvements in their sleep (Charleson, 2014).

Although the research has not yet proven that weighted blankets help, if children and parents like them, is there any harm in using them? The answer is unfortunately yes. In 2008, Gabriel Poirier, a young boy with autism died while using a weighted blanket in Quebec. Gabriel was rolled in a heavy buckwheat-stuffed blanket by school staff, with only the tips of his ears showing as a form of discipline when he wouldn’t keep quiet. The staff member set a timer for 20 minutes but when they returned to check on him, Gabriel was found unconscious and unresponsive and later died.

Following this tragic event, the Coroner Rudel-Tessier of Québec recommends;

“Because the therapeutic value of weight blankets does not seem to be proven scientifically, and because of the fact that they pose a risk for children’s lives, we could be tempted to prohibit their use altogether. However, I believe that it is possible to manage usage in a strict manner in order to minimise the danger. I believe that certain ground rules must be respected by those who wish to use this sensory pressure technique, namely:

What about using weighted blankets while awake?

There are anecdotal reports suggesting that weighted items such as blankets and vests can be safely and successfully used to help children with autism calm and focus when used for short periods while the child is awake. It is possible that weighted blankets may relax some children while they are awake. But the results of a small number of studies looking at weighted items as a way to help children calm or concentrate show no or mixed benefits. If weighted blankets are used, the safety recommendations need to be followed, whether the child is awake or asleep. 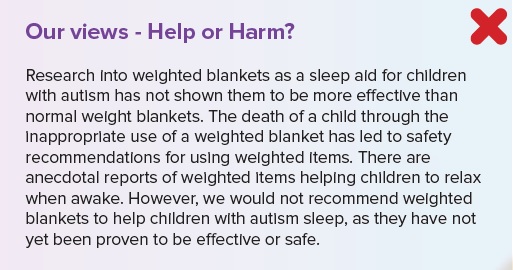 *Randomised Controlled Trial (RCT)
A study where people are allocated at random (by chance) to receive one of several clinical interventions.
RCT are considered to be one of the simplest yet most powerful tools of research.

Stephenson, J. & Carter, M. (2009). The use of weighted vests with children with autism spectrum disorders
and other disabilities. Journal of Autism and Developmental Disorders, 39 (1), 105-114.