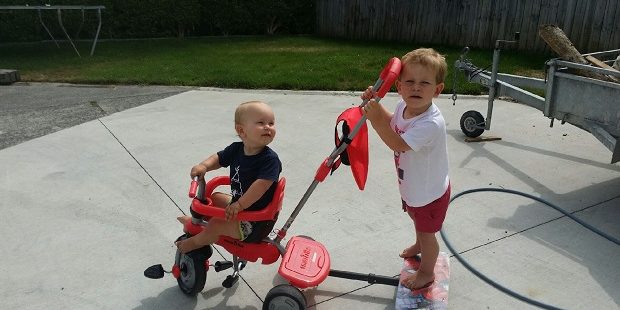 PARENTS ARE aware their child “isn’t quite right” from an early age so they question their GP, Plunket nurse, other parents, and Google in a desperate search for answers.

At first not believed, not taken seriously.  At the end of it all is a diagnosis of Autism Spectrum Disorder (ASD).

There’s no cause, no reasons why, and no cure.

Our story is a little different.

Over a period of six months we found out that both our sons have autism.  We did find out the cause but this gave us more questions than answers.

When our first son Harry was born I was excited. I had a wonderful pregnancy and a complication free birth. At first he slept well, didn’t cry much and I was blissfully happy.

On day 13 everything changed. Harry started to refuse naps during the day and it felt like he was crying all day, until, exhausted, he would pass out at around 11pm. Evenings were spent with our family walking around the house rocking, singing and patting Harry, trying to settle him.  Days were spent walking all over our neighbourhood as the moving buggy was the only place where Harry would really sleep. 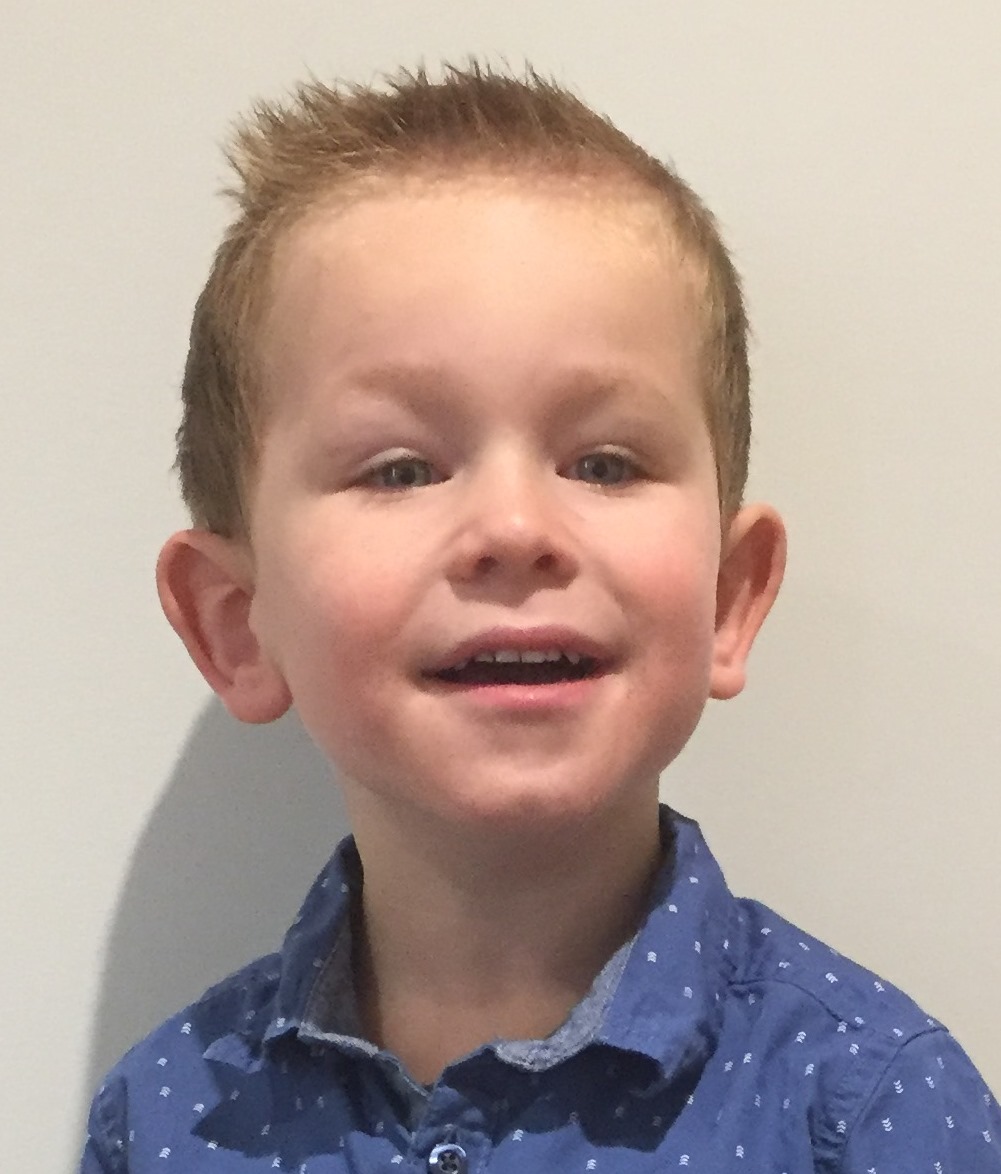 For the next few months, I worried endlessly.  My GP and Plunket nurse were convinced there was nothing wrong. I questioned the mums in my coffee group but their babies seemed much more content than mine. I stopped going to coffee groups as I felt out of place with all the happy mums and happy babies. I felt isolated and alone.

At four and a half months we hired a sleep consultant and Harry’s sleep improved.  He still cried a lot but it was definitely less than before. I returned to the coffee group gatherings.  All the babies happily laid on the floor holding toys, examining and reaching out for them. Not Harry though.

At six months old Harry lay on the ground staring at the ceiling. He never reached out for toys, never tried to pick things up or examine the world around him. I blamed myself. Obviously I wasn’t playing with him enough, wasn’t stimulating him enough.

As we continued to attend coffee group, Harry never seemed to be at the same place developmentally as the other babies. I continued to blame myself and thought maybe I wasn’t cut out to be a Mum. My partner tried his best to reassure me but something just didn’t feel right.

At nine or 10 months, Harry started to rock back and forth in his highchair and flap his hands. I had heard of autism and I was suspicious that this was what was going on. But even that didn’t sit quite right. Harry was social, loved to be around people and had good eye contact. Back to the GP and Plunket nurse we went. They were both insistent that he was young and these behaviours didn’t mean anything, he would grow out of them, he wasn’t too far behind. I tried to believe them but I just knew something wasn’t right.

By this stage I was six months pregnant but feeling terrified of having another baby.  If Harry was “normal” and this was how “normal” babies behaved I wasn’t sure I could cope. Harry still woke up once or twice in the night crying, sometimes screaming, for hours and we were concerned.

Diagnosis
Then my sister’s son, at seven years old, was diagnosed with Fragile X Syndrome.   I had never heard of this before but it didn’t take long with Google for me to realise that I had the answer I had been searching for. I was devastated.  Though I was sure, Andrew wasn’t and my GP remained unconvinced.

Life carried on and I tried to ignore the constant nagging thoughts that were telling me that Harry had Fragile X. Ben was born and within days he was acting similar to how Harry had as a newborn. I continued to nag at Andrew that Fragile X was a real possibility and he agreed to see a paediatrician. 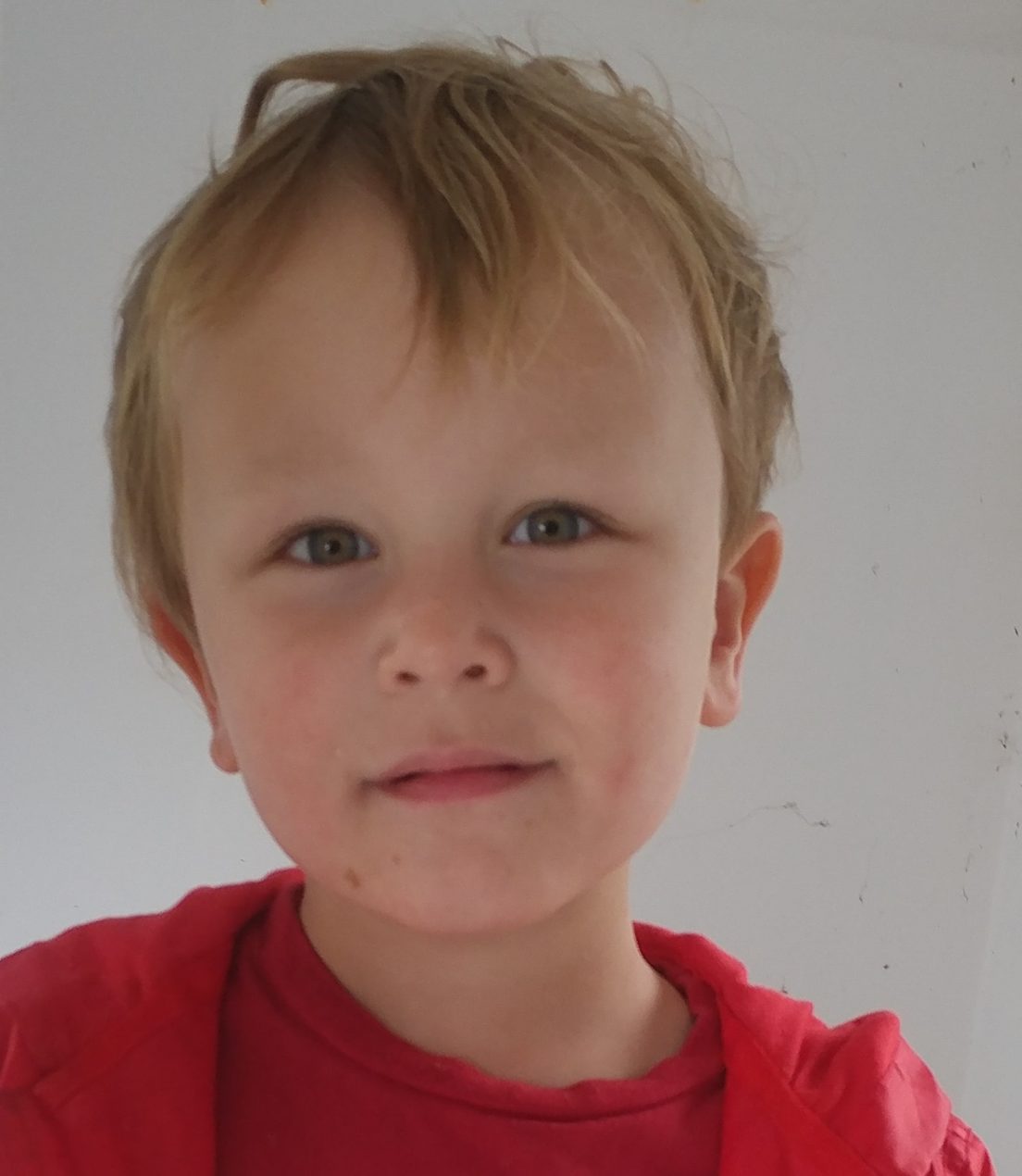 The paediatrician quickly noted the physical signs, took a family history and agreed that it was highly likely that Harry had Fragile X Syndrome.  A simple blood test, four week wait and we would have our answer. It came back positive. Harry was dual diagnosed as having Autism Spectrum Disorder and Fragile X Syndrome.

There was a 50 per cent chance that Ben would be positive so we knew we had to get him checked. Ben was very different to Harry he was more engaged with the world around him but as time went on he missed more and more milestones.

Incredibly, Genetic Health Services NZ initially refused to test Ben, despite an extended family history, an impacted sibling and missed milestones. Access to testing for Fragile X is a real issue in New Zealand. It took tears and begging to get the eventual agreement to test Ben.

The Grief Cycle
Ben’s diagnosis was much harder for all of us to accept.  Ben appeared, and still does, to be much less affected so I had convinced myself that his delays were within the realm of normal.  With both boys affected, I felt all my hopes and dreams of life with children were gone.

The most valuable piece of advice we have been given is that “nothing changes for your child after their diagnosis. They are still the same person they were before”.

I’ve finally realised that this is true. Harry and Ben, for the most part, are the happiest of kids and are loving life.  But the same can’t be said for their parents.  When Harry was first diagnosed his paediatrician told us “be kind to each other”.   We thought that was a strange comment but he was right.

There is a clear grief period for both parents post diagnosis. As individuals we all grieve in different ways and we were constantly at different places on our road to acceptance.  There have been many times over the three years that we have not been kind to each other as we struggled to get over the enormous grief we felt.

My outlook was that I would not ever get to experience the events and milestones that I had always hoped for. My feelings turned towards hopelessness and then fear, anxiety and depression.  I did however have an overpowering feeling of love and protectiveness towards my two boys.  This was enforced by the love that they showed towards me.  I knew I had to pick myself up and do whatever I could to make their life as positive, productive and fulfilling as possible. 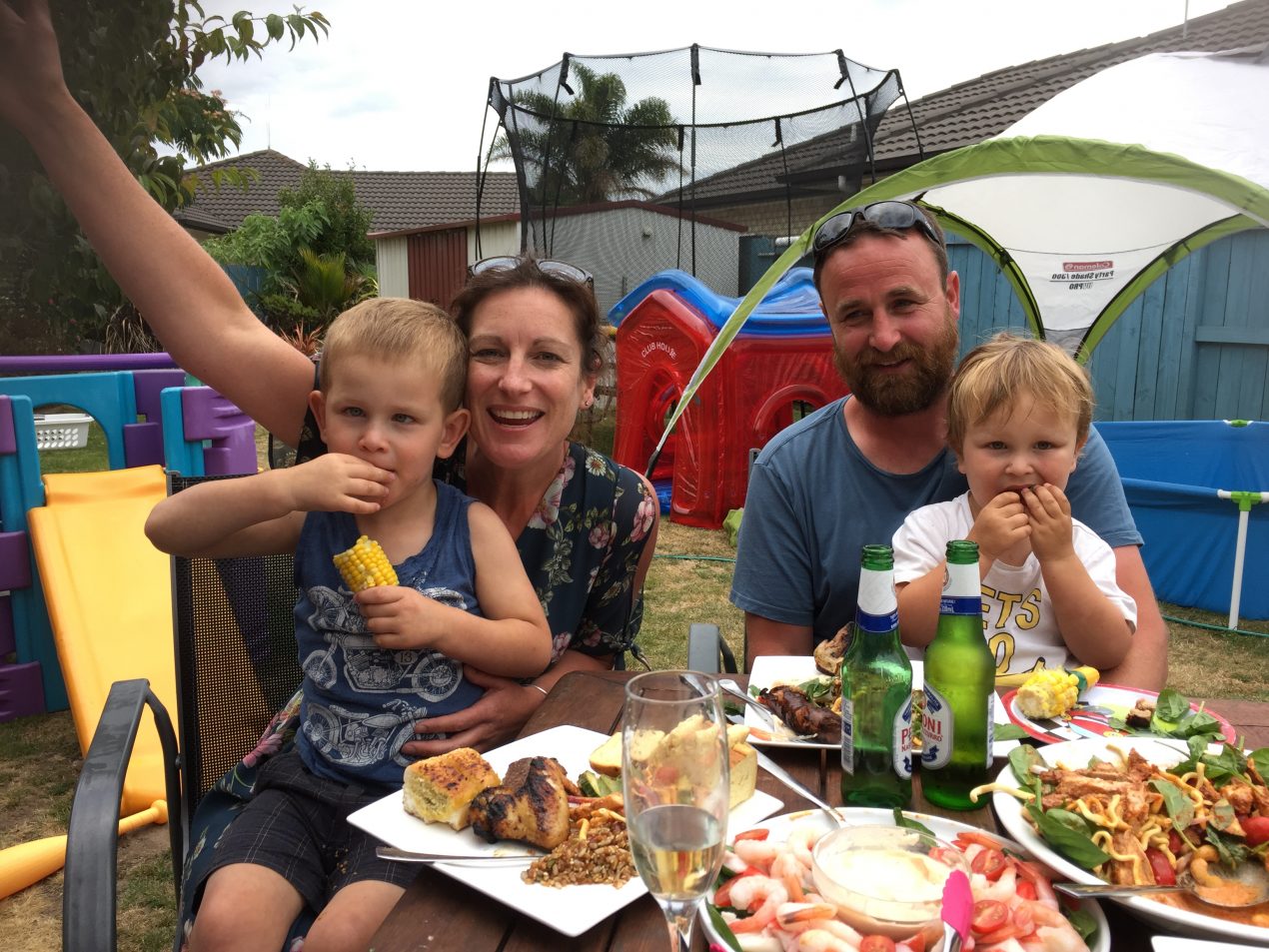 Andrew and I realised that it was us, as parents that must change our ways of thinking and how we look at life. We have worked hard to get to a place that we can be the best parents we can.

We were quick to join Fragile X New Zealand.  This is a parent-led charitable organisation from whom we received a great level of support and access to an enormous set of information. The Fragile X community is small by comparison to the autism community. I decided to access the many autism support services but with mixed results.

Although Fragile X and autism overlap with shared phenotypes, it is of vital importance that a child with Fragile X not be treated the same as a child with autism.  We discovered many research articles written about this subject.  As a parent of Fragile X children we learnt you must be very careful to select the tools that will have a good chance of success. 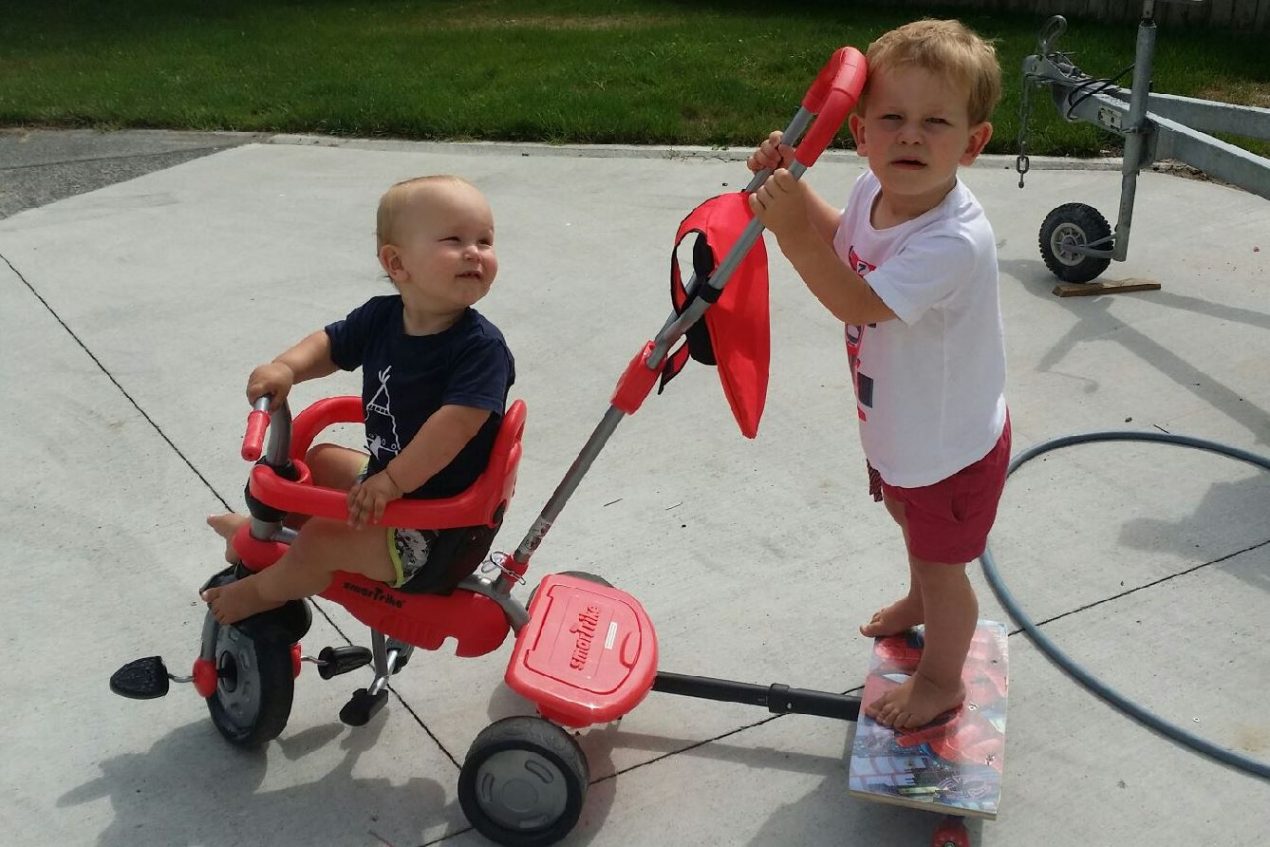 Harry and Ben playing together

At the first autism workshops I attended I felt like an imposter, like I shouldn’t really be there because of Harry and Ben’s dual diagnosis.  In reality, I found a supportive community who was more than prepared to accept us.

We are extremely lucky to have a paediatrician experienced with Fragile X who has an active interest in the condition and is willing to take guidance from offshore specialists in the field.

Unfortunately, there are paediatricians who haven’t had exposure to Fragile X before.

I have met many parents who have a child/children with autism and not heard of Fragile X let alone been offered testing for it. The Ministry of Health document “New Zealand Autism Spectrum Disorder Guideline” outlines the process for diagnosing ASD;

“Clinicians should consider the possibility and importance of genetic factors for each individual and carry out appropriate investigations, as indicated by clinical assessment. Clinicians should provide genetic advice where indicated and ensure onward referral, where necessary.”

Early intervention with Fragile X is critical and with the mistakes we made using wrongly applied techniques, we must ask; “why is this advice not being followed?”

As Harry nears five and the start of school is looming we are grateful that we have both diagnoses. We have been able to target treatments and interventions to suit his needs and we are hoping the diagnosis will make it easier to access the support he will need.  Of course, we hope the same for Ben and luckily for him we know more now than we did with Harry.

My big wish is for increased awareness of Fragile X and that genetic testing will become more common. Through raising awareness, I hope many more parents of Fragile X children are able to get the targeted interventions and support they need.