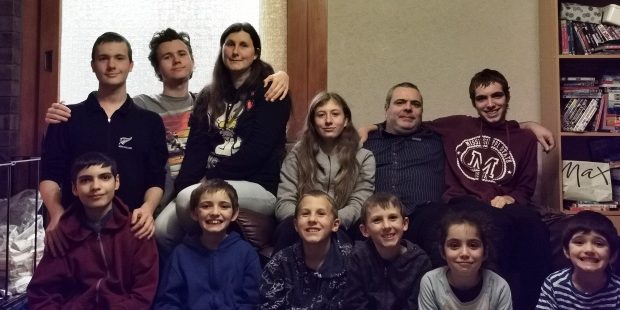 A large Te Aroha blended family have multiple children in the household – and a dad – on the autism spectrum. They spoke to Monica Holt.

MOST DAYS, 10 children come in the door at the end of the day.

Rebecca and Daniel live with their 10 children in a large busy household in Te Aroha in the Waikato.

It presents some unique challenges for the blended family who have hugely varying needs.

Daniel’s only daughter is 8. She has been non-verbal for most of her life and has high needs when it comes to certain life skills like toileting. One of his sons has Attention Deficit Hyperactivity Disorder (ADHD) and is on medication while at school. Some of the children are highly intelligent.

When Rebecca, 40, talks through the household’s typical after school routine, it gives some insight into the way they live day-to-day and the challenges they face, when all 10 children are with them (time is split with the other parents on both sides, for part of the time).

The routine, from the moment they walk in the door, is strict.

“In our house, they get home and first they have to get out of their uniforms,” says Rebecca a full-time stay-home mum.

“We sit them down, they have the option of eating what is left in their lunchboxes as they are not big eaters. Our children find it difficult to eat at school as they do not like being around lots and lots of people.”

As with many children on the autism spectrum, technology is a huge part of their lives.

If they don’t have homework the children are allowed an hour each on the electronic devices in the home, which includes two Xbox Ones, a PlayStation 4, a Switch, three laptops, an iPad and Chromebooks for the older four who are at college.

If there is homework, it can be full-on. “I am usually sitting around in the lounge with five different children doing five different things. It can be really fun, as with the primary aged kids we can make it into a little game or competition. They are all trying to learn and all trying to get it right.”

Next is dinner preparation, a huge catering-scale exercise. “I usually get one or two of them to help with things like peeling potatoes or unpacking the dishwater or generally cooking as we are trying to teach them all to have basic cooking skills.”

It is about this time, that Daniel, 41, walks through the door having driven home from his full-time job as a technical specialist in Immunohistochemistry at Waikato Hospital in Hamilton. He is responsible for the team which does specialist testing, following patient biopsy or tissue removal, to assist doctors in making a diagnosis. His day starts with a 5am wake up, and he is on the road by 6am to be at work by 7am.

He is home in time for dinner and to help with the bed-time routine.

Daniel himself is on the autism spectrum. He was diagnosed as a child the UK, but he was not told. He learned when he was aged 34. This, he says, caused some resentment towards his mother, and contributed to the breakdown of his marriage. But now he takes a pragmatic view about the family’s challenges, including his own.

The long daily commute to his job is his thinking time. “I have mechanisms that I can cope with it and that has taken many years of practice. I do a lot of processing when I drive.”

On top of his busy home and professional life, he is also a member of Altogether Autism’s Consumer Reference Group, which is a way he can share his knowledge and help others.

Like the children, Daniel also has a love of technology.

“Gaming is another entity where I can switch off from the outside world and enjoy my own world. Fortunately, it means I can also tie into their world too, if that is what they want to do. It is advantageous for me if I want to unwind from the day, I can turn a game on and usually one or two of them will either watch or join in and come and talk to me about the day, in between playing the game or telling me what to do.”

This time out is important. “Life can be extremely busy, and being on the spectrum myself, can mean I forget to take care of myself as I am taking care of everyone else.”

They live on a large section so there is plenty of space for the children to play outside in the summer months. “Te Aroha has got the wetlands just over the road from us, and the primary school has got a good playground so we will take the bat and ball down there or do a bit of badminton or kick around with a football,” says Daniel. The children attend mainstream schools.

The children do spend time with their other parents, so it means occasionally Daniel and Rebecca have time to themselves. “Dan and I don’t get a lot of time together as you can imagine with having 10 children. But when they are at their other parent’s places, we take advantage of that and we go to the cinema or something like that to have some time out to recharge.”

Rebecca says good communication is the key to making things work. “It is really important in the family. So, if any of the children have any problems at all we have taught them all to come and communicate. And with kids with autism that is not just talking, so we have other ways to communicate.”

The family is aware of other’s misconceptions. “I get very annoyed by people who have come to me and said, ‘they do not look autistic.’ We have some very, very, intelligent kids, but we have some with difficulties as well,” says Rebecca.

She knows when to ask for help, or to accept help when offered it. “I get told all the time I am ‘super mum’ but actually I don’t feel like that!”

“I am very fortunate. Dan’s kids have absolutely taken me with open arms, which has been amazing, and my kids have done the same with Dan.” She also has a great relationship with Dan’s ex-wife. She can help with the other children at home, when Rebecca has to take one to an appointment in Hamilton, for example.

What are her aspirations for the children? “They can do whatever they want. I don’t believe that disability is a stumbling block. We just encourage them all the time that they can be who they want to be,” Rebecca says.